It was the early days of the Civil War, March 1862. The public on both sides of the Mason-Dixon Line, naturally enough, was hungry for any news about this upstart, self-proclaimed Confederate States of America. It seemed that they were actually serious, having elected a Congress and President, written a constitution, adopting a flag. They’d even started printing money!

The Philadelphia Inquirer, one of the major newspapers of the day, was able to get its hands on one of the new bills that had made its way though the lines, and it printed an image of the new currency. This in itself was a rather big deal since newspapers didn’t usually contain images of any kind. You’d find them in the big weeklies out of New York—Leslie’s Illustrated and Harper’s Weekly—but the daily papers as a rule didn’t carry illustrations. Each image had to be painstakingly engraved and that was a big deal since it took both time and money (actual photographs wouldn’t begin to appear in daily papers for another 60 years or so).

So when the image of this new Confederate currency hit the streets it was a bit of a sensation from several points of view. That edition sold out almost immediately.

All this came to the notice of one of Philadelphia’s merchants/entrepreneurs. Samuel Curtis Upham (February 2, 1819-June 29, 1885) owned and ran a successful shop on Chestnut Street, 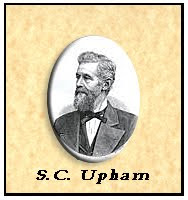 selling stationery and toiletries. He produced and sold his own patent medicines (“Upham’s Pimple Banisher”) for example. And he was doing well with patriotic envelopes, too. Each of these would carry a political cartoon that would ridicule Jefferson Davis or some facet of these new Confederate States, or would be emblazoned with eagles and shields, or the likeness of Columbia.

The story about the new money got him to thinking. So he paid a call upon the editorial offices of the Inquirer and purchased the plates used to print the image of the new currency.

And he went into the counterfeiting business.

He didn’t call his paper counterfeit, of course. Counterfeiting was illegal. He added a line to the bottom of the notes: “Fac-similie (sic) Confederate Notes Sold, Wholesale and Retail. By S.C. Upham, 403 Chestnut Street, Phila.” The first batch was of a $5 note, and these were sold for a penny each. They were to be viewed as novelties; something fun. “Mementos of the Rebellion” is how Upham referred to them in his advertisements in the New York Tribune and Harper’s Weekly.

Other entrepreneurs got in on the fun. By simply clipping off the “fac-similie” bit, Upham’s notes were virtually indistinguishable from the real thing. Cotton speculators started passing them as real. And they were being accepted in the South.

Upham was onto something. He expanded his offerings to include other denominations and eventually Confederate postage stamps. By the end of the war, he had printed nearly $15-million in fake Confederate currency (equal to about 3% of the entire CSA money supply).

He produced a quality product. In fact, many of his notes were better than the authentic ones. His paper was better. And he had access to engravers more highly skilled than the ones employed by the Confederacy. There are stories of how Southrons, when confronted with both legitimate and counterfeit bills would accept the counterfeits just because they looked more real than the genuine articles.

This came to the attention of officials in Richmond. Secretary of the Treasury Christopher Memminger wrote to Vice President Alexander Stephens, in August 1862, of the growing number of counterfeit bills in circulation and “the fact that they are publicly advertised for sale at the North proves the connivance at least, and probably the complicity, of the Government.” President Jefferson Davis apparently shared this view.

In fact, there is no hard evidence to suggest that the Federal government in Washington had anything to do with the scheme. It seems that this was entirely one more example of Yankee ingenuity’s working to make a buck…as it were. Of course it must be allowed that there are ample anecdotal accounts of Lincoln’s Secretary of the Treasury, Salmon P. Chase, winking at the entire enterprise.

The great Congress of the Confederacy was not amused, and passed a law imposing a sentence of death upon convicted counterfeiters. Upham claimed that same Congress put a price of $10,000 on his head, dead or alive. After the war, he bragged "During the publication of those facsimile notes I was the 'best abused man' in the Union. Senator Foote, in a speech before the rebel Congress, at Richmond, in 1862, said I had done more to injure the Confederate cause than General McClellan and his army..."

Other printers in the North, seeing Upham’s success, also started issuing “fac-similies.” The increased supply, coupled with the collapsing Confederate economy, pretty much killed the business. The price that could be commanded for the notes fell through the floor, and there just wasn’t the demand any longer.

Now we fast-forward 150 years…to this past Friday morning, to be exact. A gentleman walked into my shop, looking to sell two pieces of what he claimed to be Confederate currency. Holding the notes in my hand, something didn’t seem quite right. I am far, far from an expert on such matters, but my “Spidey-sense” was tingling here.

At first blush, they appeared right. They "felt" old, and didn't appear to be modern reproductions. But. They were printed on very good paper; better stock than I had seen before with Confederate money. Next, the engraving was highly detailed and of a better quality than on other pieces I had had. And finally, when examined under a magnifying glass, it appeared that the signatures had been printed, rather than hand-signed (as was the practice at the time). Ditto, the serial numbers. These just weren't passing my initial smell test. 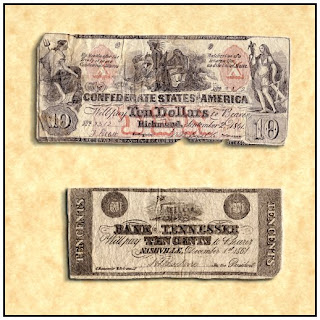 Out of curiosity, I asked how he had gotten them and he told me a story about getting them earlier in the week “from some guy in a bar.” Obviously not a lot of provenance there.

With his permission, I held onto the bills to do a little research. After a couple of hours poking around various websites, I had an answer. It turns out that these were Upham bills. Genuine counterfeit Confederate currency.

They are worthless in terms of legal tender, of course. But that was never Mr. Upham's stated intent. He was looking to produce “mementos of the Rebellion.” And as such, they hold up rather nicely.

To collectors they actually have just a little more value than authentic Confederate currency.